An exceptional English wooden cased carriage clock.  The case, made of the finest coromandel wood, has exceptional figuring to the whole case including the back.  It has a well cast and chased fire gilded handle with foliate swags to the side of the octagonal centre and to the base where they go into the lugs.  The case itself has an opening front door with glass panels to the sides, the top and the back to view the movement and the escapement.  It has an ogee shaped moulding below the dial with a small plinth and flattened bun feet in each of the four corners.  The feet are adjustable.

The beautiful dial consists of a pierced and engraved gilded plate mounted over a polished and gilded backplate.  The chapter ring, which is set into it, is of white enamel with Roman numerals.  It has Breguet style hands and a beautifully engraved and gilded sight ring almost identical to a similar clock by Payne shown on page 343 of Derek Roberts’ book.  The dial is signed on a cartouche above VI for the retailers ‘Payne & Co, New Bond Street’.

The eight day chain fusee movement has a large gilded platform mounted on the top with a split bi-metallic balance with poising screws.  It has a beautifully made adjusting lever which runs against an engraved sector visible on the backplate.  The hand set and winding squares are both mounted on the backplate and the clock strikes the hours on a steel gong.  The repeat button for the movement is mounted on the side of the case rather than on the top, a feature which it again shares with a carriage clock by Payne in Derek Roberts’ book.

William Payne is recorded as working as a clock and watchmaker at 62 South Molton Street, London as early as 1816.  He moved to 163 New Bond Street in 1825 where he is subsequently recorded at various times as being both a watch and clockmaker.  From 1847-50 he is also listed at 62 New Bond Street but this address has been dropped by 1851.  By 1906, still at the same address, the firm is described as Watch and Clockmakers, Jewellers, Diamond Merchants and Pedometer Makers; however it would seem likely that they were heavily involved in the retailing of clocks, watches, jewellery and silver at a much earlier date than this, possibly the 1850s.  From 1912-15 they are shown at 165 New Bond Street.

Further details can be found in:- 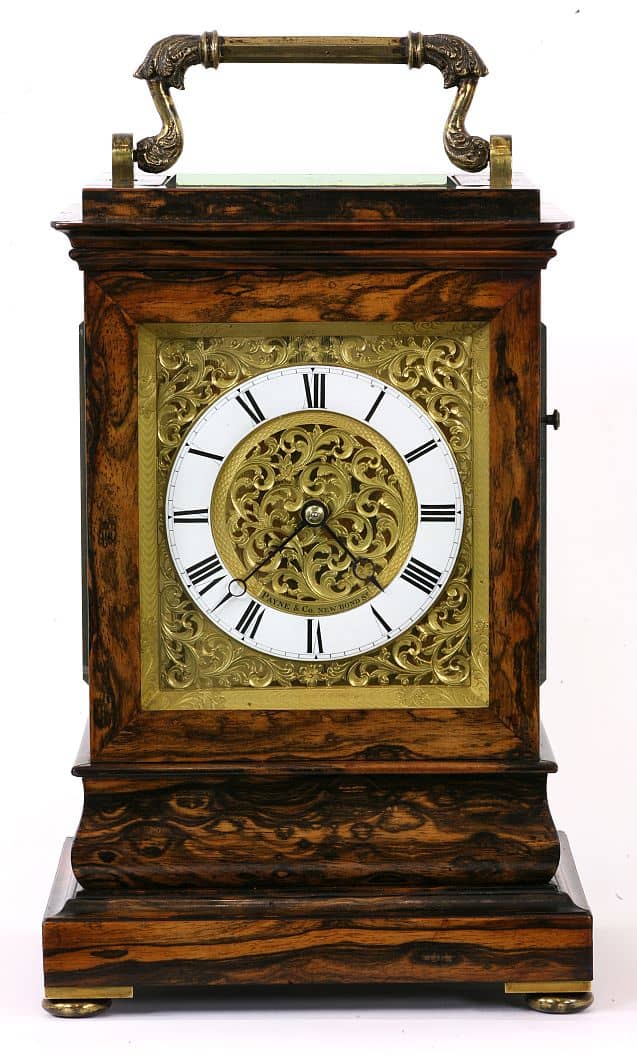 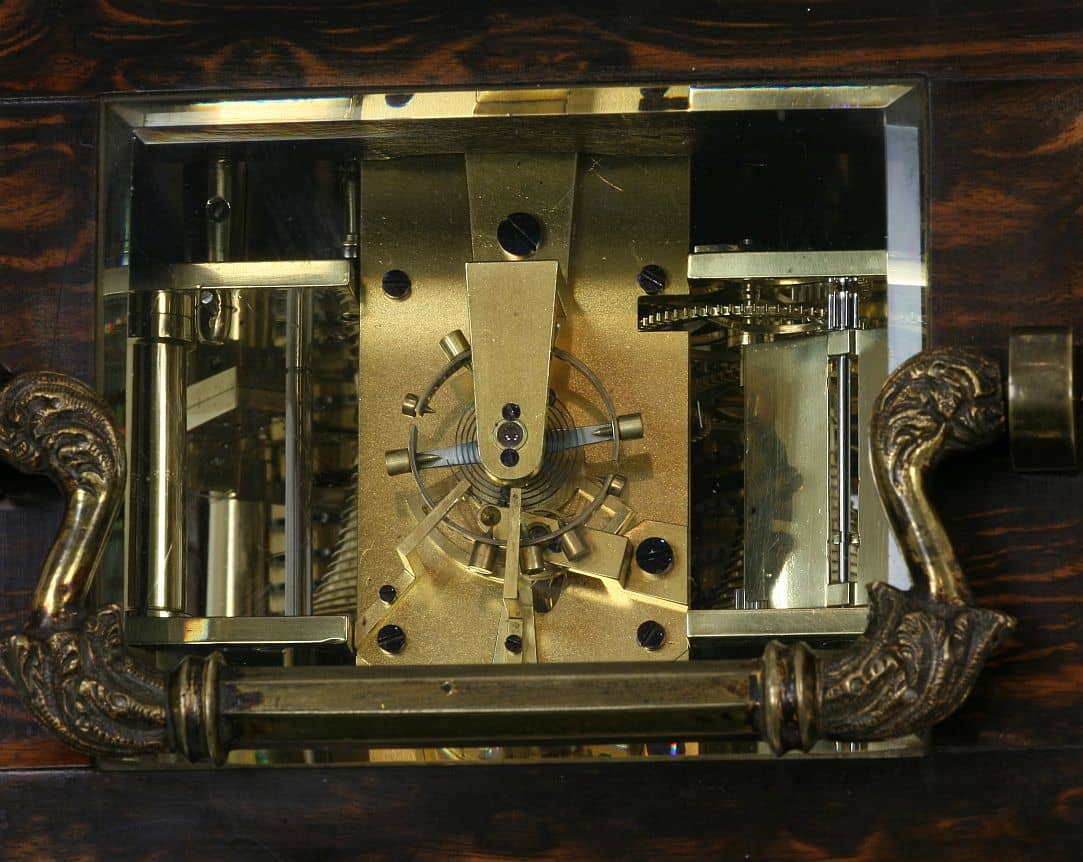 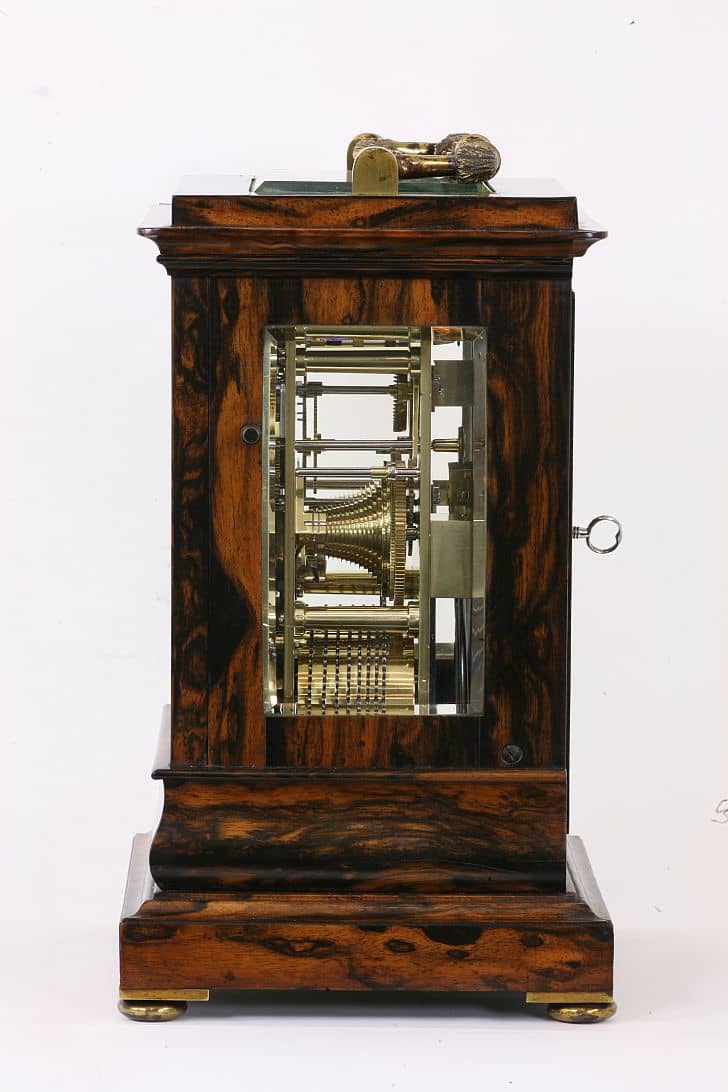 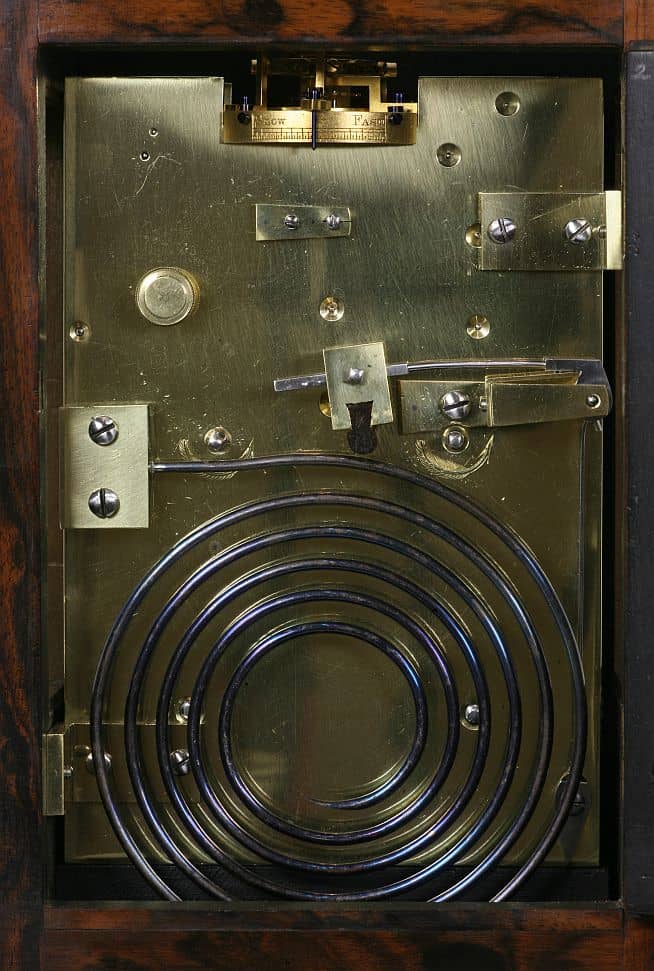